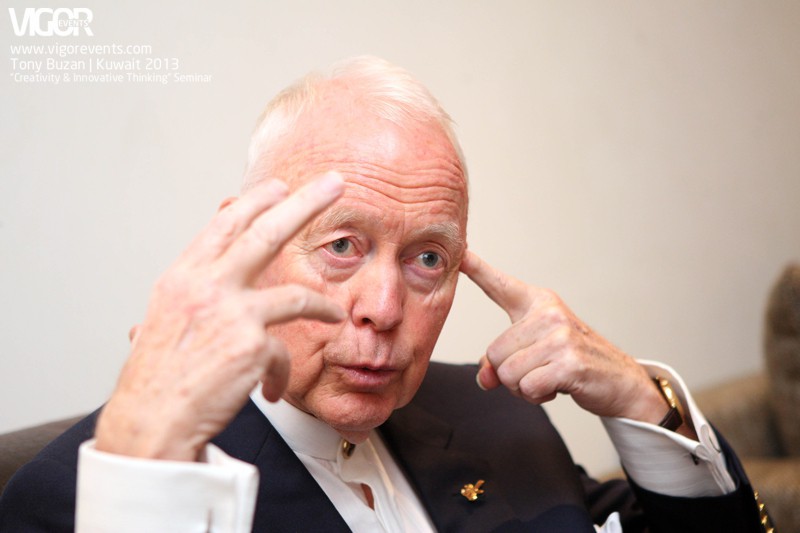 Vigor Events & ALGAS Events organized a one-day seminar in Kuwait on the 25th of September 2013 for Tony Buzan. In this ground breaking seminar, Tony Buzan, the inventor of Mind Maps (and owner of the world’s highest Creativity IQ), introduced 21st century Creative Thinking concepts and guided the attendees through a fast paced seminar. This seminar was one of the most rewarding and stimulating events of the year.

Tony Buzan is the originator of Mind Maps and the concept of Mental Literacy, co-founder of the Mind Sports Olympiad and Chairman of the Brain Foundation. He is the author of more than 25 books and the co-author of a highly acclaimed series of study guides.

Use Your Head, Use your Memory and Speed Reading have become classics and have been translated into more than twenty languages. Tony’s other landmark books include The Mind Map Book, Radiant Thinking, Buzan’s Book of Genius (with Raymond Keene), Creating a Thinking Organization (with Rikki Hunt), and The Brain Smart Leader.

Tony’s most recent book, Head First: You’re Smarter than You Think, introduces readers to the multiple and often overlooked aspects of human intelligence and provides a blueprint for utilizing and developing the full range of their potential. Head First has remained at the top of the business best-seller list since its release in October 2000. Three new books are scheduled for publication in 2001: The Power of Creative Intelligence, The Power of Spiritual Intelligence and Head Strong.

Tony Buzan has presented or been featured in documentaries as well as in many television and radio talk shows. He has advised government departments and served as consultant to many multinational organisations, including Hewlett Packard, Arthur Anderson, Fluor Daniel, Goldman Sachs, IBM, BP, Barclays International and EDS. He is a regular lecturer at leading international universities and business schools.

Tony Buzan is the co-founder of the Mind Sports Olympiad, which has, to date, attracted 25,000 entrants from 74 countries world-wide. He is the founder of the World Memory Championships, the originator of the concept of Mental Literacy, a prize-winning poet and athlete. Being a global media personality, Tony Buzan has appeared on over 100 hours of national and global television, and over 1,000 hours of national and international radio and has been seen and heard by an estimated three billion plus people.

This seminar was a part of The Knowledge Club™ series of valuable and unique seminars that will be organized in Kuwait by Vigor & ALGAS Events, The Knowledge Club™ is a unique and exceptional opportunity for companies and organizations to bridge between marketing and HR, brand and culture, inside and outside in order to better promote the company brand.  The Knowledge Club™ is sponsored by Hadi Clinic, KLSC, Markaz, Qualitynet, Ahli United bank, Future Tech and IAA-Kuwait