‘Every Failure’ A Step To Success
Born Without Limbs

KUWAIT CITY, Feb 15: “Never give up, even after repeated failures, because each failure means a step closer to success,” says a man who had every reason to give up on life.
Nick Vujicic was born without limbs and once contemplated suicide during his childhood out of frustration at his seemingly helpless situation, but thought better of it after realizing the guilt, pain and suffering it would bring his parents.

He has since learned to deal with those circumstances and is now a sought after motivational speaker across subjects such as disability and hope.
Vujicic gave a talk Sunday on the topic “Living a life without limits” at the Kuwait Chamber of Commerce and Industry auditorium.

Speaking to a mixed audience of Arabs and non-Arabs from atop two tables joined end to end, Nick Vujicic, without arms and legs but with a fully developed torso and with two small feet one of which has two toes, looked small as he paced about. But when he began to speak those awe inspiring words, people in the room forgot how he looked and he seemed taller than everybody else.

“Fear,” he started off, “is the biggest disability of all. You shrink at the thought of failure even without trying,” emphasizing he said “one should not lose hope and keep on trying what one want to make out of their life until they succeed. You don’t know what you can achieve until you try it,” he added.
He also said that one should be thankful for what they have. “There’s no use complaining about what you don’t have,” in obvious reference to himself.

He challenged his audience and their perspectives, encouraging everyone to dream big and improve their own attitudes regarding the obstacles in their lives. A message driven home by his own persona, his disability a constant reminder that every day challenges they face in their lives can be overcome; that they should use, to the best of their ability the gift they have been given.
He also shared key values and attitudes that give one the insight to draw strength from every circumstance by choosing to have the right approach.

“If you put your happiness in temporary things, your happiness is temporary;” “Your biggest discouragement comes in your mind;” “It’s no use to hold your love one’s hands if you can’t hold their heart;” and on faith “Just because you can’t see it, doesn’t mean it’s not there;” “You can’t pass hope if you don’t have hope yourself;” and “You can’t pass integrity if you don’t have integrity;” are some words of wisdom he imparted.

Born Dec 4, 1982 and the first-born child of devout Serbian Christian parents, in Melbourne, Australia with the rare Tetra-amelia disorder: limbless, missing both arms at shoulder level, and legless but with two small feet, one of which has two toes. His parents were initially devastated upon his birth. He grew up otherwise healthy.

His life was filled with difficulties and hardships. One was being prohibited by Australian law from attending mainstream school because of his physical disability, even though he was not mentally impaired. But during his schooling, the laws were changed, and he was one of the first disabled students to be integrated into a mainstream school.

Kuwaiti business leaders, representatives of the public and private sectors, critical thinkers, academics and journalists gathered 8th December 2009 at an event that discussed the new paradigm of leadership. ‘Think big, act big,’ it turns out, is the mantra underlying the concept of new style of leadership and the crucible of leadership innovation. Betsy Myers, a senior advisor to Barack Obama’s presidential campaign and a leadership expert presented her vision of leadership during the seminar titled ‘The New Leadership Model.’ The one-day forum, which was attended by business leaders, advisers, consultants and media was held at the JW Marriott Hotel in Kuwait City on 8th December 2009.

Myers, who has held executive leadership positions in the public sector for over two decades and a grand total of 25 years in the turf, admits that she has a “life-long curiosity about leadership.” Providing her own description of a leader, Myers says that “listening and saying thank you” are key to the new leadership paradigm – an argument culled from a long stint of experience.

In her words, leadership goes beyond one single national context. “Leadership is self-knowledge. It is not about having all the answers. It is about asking the questions,” she asserts. According to her, being authentic and being true to one’s self are pivotal for a leader – a concept that made her join the Obama campaign team. “Obama is truly authentic,” she said providing firsthand accounts on the ground of her work on the campaign trail.

Attending to her pivotal topic of what makes a good leader, she stressed that leaders are optimists who’bring energy to the organization.’ Taking the point further, she said that leaders have ‘a sense of curiosity’ and remain ‘student(s) of life.’

She also argued that working hard on your self-knowledge and challenging your personal assumptions are essential for a leader. Leaders challenge assumptions, she said. She further stressed that listening is ‘a critical skill’ and ‘leadership is a team sport.’

Grounding her argument on the lessons learned from the campaign trail and Obama’s leadership style, she argued that remaining true to yourself is critical to a leader. Working on the Obama campaign, she said,”was an opportunity for her to have a front-row seat and see a new type of leadership”.

During the forum, Myers outlined pivotal elements of respectful leadership and provided insights for leaders who want to improve both their personal and organizational success. The forum also dwelled on a toolkit that leaders could apply in thinking about and exploring their personal leadership efficiency.

Some Topics Discussed During the Seminar 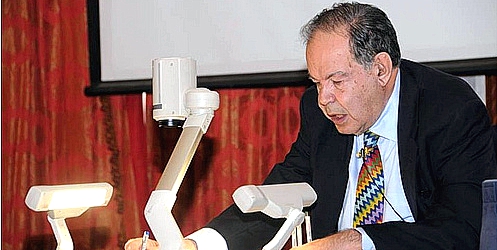 OPERATIONAL FLEXIBILITY AND CORPORATE FLEXIBILITY ARE THE ONLY WAYS KUWAITI COMPANIES CAN COMPETE WITH INDIA AND CHINA, SAYS LATERAL THINKER EDWARD DE BONO

(Kuwait, September 2008): Finding the flexibility in business operations – and injecting your organisation with innovation – are the only ways left for Kuwaiti companies to differentiate themselves from countries like India and China, according to Edward de Bono, the world’s foremost creative thinker.

“It’s no longer good enough for organisations to find better ways of following the same old routines,” said de Bono. “What is needed is a new degree of flexibility, a system that’s open to innovation and suggestion, not merely a repetition of the methods of the past.

“The old efficiencies and standards of excellence still apply. The problem is that our organisations are no longer able to compete with the emerging giants of India and China, where they are able to do these things better, at a lower cost.”

De Bono teached some of his patented lateral thinking techniques in person during an exclusive one-day event in Kuwait, entitled Maximising Creativity and Lateral Thinking to Deliver Strategic Success, on November 2 organized by Global Leaders in cooperation with Vigor-Events. During a similar event recently, participants came up with 21,000 new ideas during the day.

By using lateral thinking, de Bono said we can be innovative, to simplify problems and to find new ways of doing the same old things more effectively.

He believes that all countries should include these teaching methods in the national educational curriculum, following the example of China, for instance.

De Bono is regarded as the leading authority in the field of creative thinking, innovation and the direct teaching of thinking as a skill. He is equally renowned for his development of the Six Thinking Hats® technique and the Direct Attention Thinking Tools™ (D.A.T.T.™) framework.